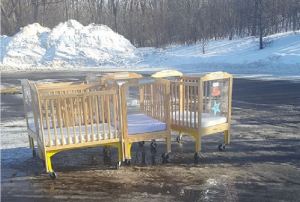 Hundreds of Jewish community center (JCCs) and day schools have been on the receiving end of bomb threats regularly for weeks. Thankfully, no bombs have gone off, but it is still traumatic for the kids being rushed out of their daycares and schools (sometimes in cribs), the caretakers and teachers protecting them, and the parents rushing to the scene. The numbers are crazy and are multiplying seemingly weekly. All of this while more than 500 headstones in a Philadelphia Jewish cemetery were desecrated. 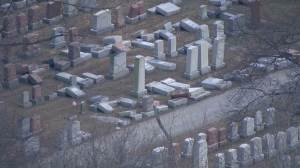 Mosques have been threatened with arson – several times successfully in the past year. In one case, the mosque was set on fire twice in five months. The homes of Muslims have been targeted too – arsons against Muslims appear to be on the rise as well. Threats of violence against mosque feel more present after the shooting in Quebec in January that left six dead. Just a quick Googling will have you going down the rabbit hole of Islamaphobia in the past few months with accounts of Muslims being harassed and threatened, plus the reports of violence shared by advocacy organizations. Then there was the bar incident last week in Kansas in which two Indian immigrants were shot, with one dead, after being told to “go home.”

Racist graffiti is popping up everywhere. Reports of public elementary schools and playgrounds being tagged with swastikas are commonplace. Anecdotal evidence points to racist statements and epithets being thrown around more regularly, even in unexpected, seemingly liberal locations. And yes, this is 2017, not 1937. “Since the election, we’ve seen a big uptick in incidents of vandalism, threats, intimidation spurred by the rhetoric surrounding Mr. Trump’s election,” Richard Cohen, president of the Southern Poverty Law Center (SPLC) told USA TODAY. “The white supremacists out there are celebrating his victory and many are feeling their oats,” Cohen said.

One of the ways they’re celebrating? By becoming official! SPLC’s annual Hate Crimes Survey shows that “[t]he number of hate groups in the United States rose for a second year in a row in 2016 as the radical right was energized by the candidacy of Donald Trump.” Mark Potok of SPLC states, “The country saw a resurgence of white nationalism that imperils the racial progress we’ve made, along with the rise of a president whose policies reflect the values of white nationalists. In Steve Bannon, these extremists think they finally have an ally who has the president’s ear.”

Trump has only spoken once about the anti-semitic hate crimes, and that was after weeks of threats and attacks. (On that statement, the Anne Frank Center for Mutual Respect called it a “pathetic asterisk of condescension.”) Has he condemned hate crimes against Muslims? No. Nor has there been an equivalent call to action. Perhaps more troubling is a denial of Islamophobia by right-leaning media (no, not just Breitbart).

The recent rise of hate crimes against Jews and Muslims didn’t appear out of thin air; hate crimes have always been here and about 75 percent of reported hate crimes target Jews, Muslims, and those perceived to be either.

These events are unthinkable, and they may seem distant. But they are in our neighborhoods. White supremacist pamphlets on them are being left on cars and in driveways. Friends are jeered and afraid to walk home in the dark. Smaller acts of racism aren’t in the newspaper, but they are impacting our communities.

Can we expect hate crimes to dissipate? It’s unlikely. And there is little evidence that Trump will meaningfully condemn attacks. Until there is a systematic and widespread effort to counter these efforts, the white supremacists have no reason to back down. That doesn’t mean we shouldn’t rise up.

You have options for what you can do to take a stand against hate crimes: 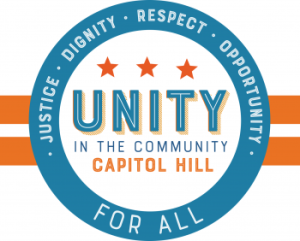 Consider ways of creating a “hate-free zone” in your community. While largely symbolic, this is a way of reaffirming that everyone is welcome where you live. In my neighborhood in Washington, DC, two residents created a “Unity on the Hill” sticker that was given out to local businesses and more that “share values of peace, tolerance, diversity and respect.” Our city councilmember, Charles Allen, stated, “For those feeling vulnerable or fearful in the face of hatred and violence, the Unity signs in storefronts, residences and places of worship across the neighborhood will be a powerful message to both residents and visitors that all are welcome here.”

Rise up. We’re in this together, and we have each other’s backs! 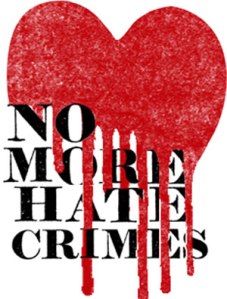 3 thoughts on “Hate on the Rise”