New guest poster this week, but as she is a scientist and project manager for a vaccine manufacturer, she’s posting by her first name only: Katy.  The opinions expressed in this blog post are hers alone and not necessarily that of her company or any of its representatives. 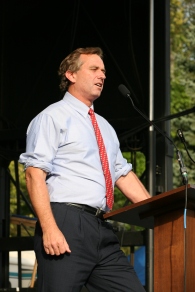 Robert Kennedy Jr is not only unqualified to hold a position in anything related to human health and immunization, but his appointment would directly undermine President Elect Trump’s establishment shakedown.  Essentially, the only thing that differentiates Robert Kennedy Jr from any other conspirator, is his last name, which comes from one of the most established families in US government.

Immunization is already heavily reviewed and monitored by multiple agencies (listed in no particular order); HHS, CDC, FDA, HRSA, NIH, CMS, IHS, NVPO, BARDA, DoD and VA.  These groups participate in the National Vaccine Advisory Committee (NVAC) which “promotes collaboration among all federal partners invested in vaccine safety activities” (1).  All of these acronyms mean a whole lot of smart people (medical doctors, researchers and public health experts) who have dedicated their lives to finding safer and more effective ways to protect human health worldwide through vaccination and medical advancement.

According to Robert Kennedy Jr, these people are also involved in the US government conspiracy to cover up the link between vaccination and autism.  A link that has been disproven by more than 100 studies (and no, these weren’t performed by the government or by vaccine manufacturers)(2).  The arguments presented by people like Robert Kennedy Jr and the anti-vaccine community are rooted in fear, not in science.  And it is this fear of vaccines that perplexes me….

And if that data isn’t convincing, let’s look at some more numbers:

You are more likely to:

than you are to be injured by a vaccine (1:28,000).  That means out of the roughly 92,000,000 children that have been vaccinated since the inception of the National Vaccine Injury Compensation Program (NVICP) in 1988, only 3,256 cases have been ruled in the judicial system as damage caused by a vaccine and receiving compensation(6).  And this number is also skewed because while the 92,000,000 doesn’t include the hundreds of thousands of adults each year receiving vaccinations, it does include their possible NVICP cases in the 3,256.  A child alone has a 1 in a million chance of suffering an allergic reaction to a vaccine.  Compare this to the 1 in 100 chance of being in a car accident and a 1 in 10,000 chance of that car accident being fatal.  All of this data is also not saying that there have not been any problems.  It is simply stating that the risk of having a problem with a vaccine are so low as compared to the risk of getting sick with the disease or spreading it to others.

It would be imprudent to ignore the risks of injecting anything into your body.  But risk of injury from a vaccine is far less than the risk of injury from catching these diseases.  There is also a proven public health benefit called herd immunity that shows the measurable protection gained through a community with high vaccination rates (7).  Therefore, by vaccinating yourself you protect others around you as well, those who are too young to receive a vaccine, the elderly or immunocompromised.

So those are the numbers on vaccine safety, what about effectiveness?  Vaccination has lead to the worldwide eradication of smallpox and eradication of polio across most of the globe.  Smallpox is believed to have caused over 500M deaths and has been a devastating disease across human history.  Polio affected hundreds of thousands of people in the US annually in the 20th century, with as many as 7,000 deaths annually until the introduction of a vaccine in the mid-20th century.  So many lives have been saved worldwide due to vaccination that you cannot even find a total.  For example, from 2000 to 2015 the WHO estimates 17.1 million lives saved worldwide from measles alone.

Therefore, President Trump and Mr. Kennedy you are wrong.  There is no link between vaccination and autism and your belief in such only proves your complete disregard for science and data-driven analysis.  Furthermore, your propaganda undermines one of the most significant advancements in human history: immunization.  The implementation of a Vaccine Commission lead by a conspiracy theorist who believes there is a government cover-up on a link between vaccines and autism would only lead to ineffective and irrelevant conclusions on vaccination and a waste of taxpayers money.

One thought on “Yet another one of Trump’s horrible decisions: Vaccine Commission”

And we're back! Sorry for the lapse in posting for a couple weeks, but we're back at it with a vengeance. This week I read Breitbart News...freakin scary is all I have to say. However, changing the direction of our country means understanding the media that everyone consumes. Head to the blog (link in bio) for my thoughts/insights. #FiveMinutes . . . . #breitbart #altright #read #news #stayinformed #act #activist #activism #politics #donaldtrump #45 #dumptrump
How did we do it? How did we flip all our city council seats to progressives? Head to the blog (link in bio) for insights into how to start the change on a local level. We can't change it from the top down, we need to start in our own communities. #FiveMinutes #localpolitics #local #election #citycouncil #city #morgantownwv #wv #feminist #community #activist #activism #politics #politicalblog #hope #getoutthevote #progressive #change
New post up, link in bio: A Morgantown, WV referendum on Trump, and he lost. #FiveMinutes #trump #donaldtrump #referendum #morgantown #wv #wvu #indivisible #politics #activist #activism #45 #hope #localpolitics #community #local
A somber picture to match my somber mood. Head to the blog (link in bio) for some of my thoughts on this dark time. To move onward we must let it all out. #FiveMinutes #catharsis #letitout #activist #activism #notmypresident #dumptrump #donaldtrump #45 #bannon #election #hrc #clinton #homeland
This is a very sad day for our democracy. These asshats should be ashamed. #shame #republicans #senate #slipperyslope #democracy #congress #idiots #wtf
Another episode of New Activists on the Block is up on #soundcloud and now #stitcher ! Head to the blog (link in bio) for links to the #podcast. We talk about trying to get a town hall with our elusive senator. It's all about persistence! #FiveMinutes . . . . #localpolitics #community #capito #wv #morgantownwv #morgantown #townhall #resist #TheResistance #beheard #local #activist #activism #act #notmypresident #donaldtrump #dumptrump #45